The wedding day was a great occasion and we really enjoyed the day! However, there were things that didn’t go to plan, but everyone seems to say that about weddings and I knew it wouldn’t be one hundred percent perfect, as that’s not how life works.

We had an inexperienced wedding planner, the restaurant where we held the reception made a few mistakes and no one had the list of who ordered what dessert, leaving us to try and remember what our guests had ordered. It was too windy on the cliff top for the parasols during the ceremony, so our guests had to brave the sun. Furthermore our celebrant didn’t follow the script, therefore ruining the meaning of our readings and the bride was late…but the last one happens all the time!

However, looking back on the wedding, which was a month ago now I can say it was a great day and I really enjoyed myself. I have also made peace with the things that didn’t go to plan. I look back at it now happy that our families were out there with us in one of the most beautiful locations I have ever visited. 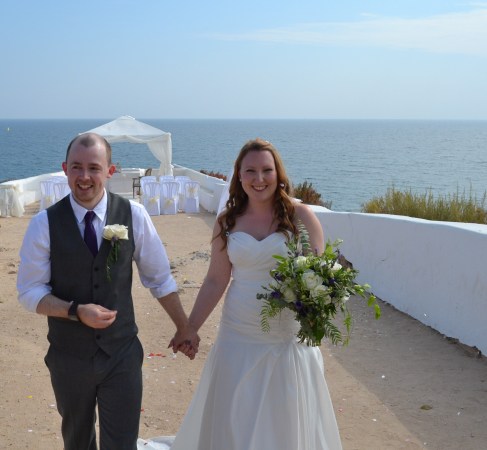 This is just a quicky! The day has arrived when we finally fly out to Portugal! We get married in 4 days, the weather is looking good and everything appears to be falling into place!

I can’t believe it has finally arrived and it has gone so fast! So I will report back about it on my return in a couple of weeks!

Because it is all so close we have not been able to stop ourselves from checking the weather over and over again! To our amusement each weather website we’ve checked has had different opinions on the weather and it has changed constantly! Even BBC weather has been unpredictable and improbable.

If we trust what we have read then on our wedding day it will be cloudy with intermittent rain and temperatures ranging from 24 to 41 degrees…and a lot of sunshine….

It is only a week to go until we fly out to Portugal and 11 days until we get married!

Our white board that has been laden with tasks for the last few months was almost wiped clear a few days ago. However, my fiance has reorganised the board into the “final tasks” which includes stuff we need to get done for the holiday, not just the wedding. So, the board is nice and full again!

I’ve worked out that we need to do around 3 tasks a day to get everything done. But part of it is a waiting game, as certain jobs need to be done at specific times…but we may start packing today!

Paying for the wedding took a whole week to do! After a few days of waiting for an email reply, all the original issues had been corrected. However, there was a mistake with the meal choices, so we had to correct that too.

We have paid the florist too. That went a bit more smoothly. I had to ring a Portuguese number and gladly was only on the phone for a minute and a half. No mistakes were made and it was nice for something to run smoothly.

Yesterday we emailed our wedding planner to start the process to pay the rest of our wedding bill.

The positive part was that we got a reply within a few hours, but there were quite a few errors with our final bill! So this meant writing an email late last night to correct these mistakes, as we didn’t want to be thinking about it all day, weighing on our minds until we sorted it.

The final numbers for the meal were wrong and we didn’t ask for a minibus to transport our guests! We also don’t want to take a certain large amount of money over to Portugal just to pay for part of the wedding in cash!

I think a lot of these problems have stemmed from the fact our wedding planner changed a few months ago and everything has to be passed along several people, almost like Chinese whispers. So it is not surprising mistakes have been made.

I have been asked quite often since being engaged if kids are soon to follow. I give the same answer each time, which is no…well not for a fair while anyway.

Even though my fiance and I do want children someday, hopefully that day won’t be for a few years, for the simple reason that we are just not ready for them right now. Also seeing our siblings have children has just put us off more. Don’t get me wrong, we love our niece and nephew, but we don’t want to be the ones raising them!

However, we still get asked the question whether we’re going to have children soon after the wedding. It is seen as an archaic notion these days to get married if you get pregnant. It is a thing of the past, even though some people still do it! So why does it not work the other way round?

Marriage and kids don’t necessarily come hand in hand. We want to enjoy marriage and our youth first before handing our lives and freedom over to our children.

I wasn’t sure if I was going to have a stag do at one stage. It was also the case with my fiance having a hen do. However, we both had friends or family members who hoped we would and/or expected us to! We also realised that we wanted to do it too.

My fiance had to have hers on the 3rd August, so her best friend was able to go. So, I decided to have my stag do on the same night. I didn’t have the money to do anything extravagant like so many stags do, such as Amsterdam for a weekend or on a smaller scale go paint balling or go karting.

I decided to keep it simple and we rented out a couple of American pool tables at a club in the city centre. However, we played more games of normal pool, rather than American. Whichever one we played it was good fun! Also playing on American pool tables boosts anyone’s self esteem because the pockets are so big it makes it quite a bit easier to pot!

Next was a meal at TGI Fridays, which involved me wearing balloon headgear in the shape of antlers and being given a free shot called a ‘brain hemorrhage’ which was rather minging!

We went to several pubs afterwards, having drinks and going nuts by playing the awesome board game of Frustration. It was a lot of fun and I’m glad I did it.

My fiance was glad she had a hen do too. She did a cocktail making class, followed by a meal and played a lot of games in a bar, which were set up by her bridesmaids.

Now it’s less than 5 weeks until we get married!

A day’s stress over a florist

When there’s only 6 and a half weeks until the big day one thing you don’t want to happen is to receive an email from your florist saying they’re now unable to do your flowers! If there was a good reason for this, it would have made it a bit easier to accept it, but having to go back to the UK to take your children to boarding school, so that she can jet back to Portugal to be a florist, is not a good reason.

As expected my fiance replied and was very upset. She said this to the florist too. All the florist needed to say was that she was very sorry and just be very apologetic, but no! She actually said “I have a life to organise too” which was rude, uncalled for and completely unprofessional. It was a good job we didn’t have to pay a deposit! But then again, maybe that’s why she didn’t take a deposit from us, because she thought she may let us down. To not be very apologetic about potentially ruining someones wedding day is crazy and unbelievably rude.

Annoyingly this florist didn’t have any bad reviews on the internet, or any reviews for that matter…none we could find anyway! And when searching for a florist in Portugal she is the most prominent.

At least she recommended another florist in the Algarve, although she was a bit sparse on the information she gave us. We managed to find an email address for this other florist and we contacted her immediately! We also contacted our wedding planner asking for urgent help!

To our joy and relief the new florist replied this morning to say she could do our flowers and only at a fraction more than we were already paying. We have to pay a deposit for this one, which makes it feel safer and means we’re probably dealing with a more professional company.

So the panic and stress only lasted a day…lets hope there’ll be no more hiccups like that so close to the wedding.

Not much to do…

Now there is only 7 weeks and a day until the wedding we don’t have too much left to do. Over the last couple of months we have blasted through our to do list, so we weren’t rushing round in the last few weeks panicking over whether we’d get everything done in time.

However, achieving this means we are now looking at our wedding board thinking it would be nice to have something to do…It’s not like we have nothing, but it’s either easy 5 minute jobs or such things as the seating plan, which can’t be done until we have a fully finished guest list.

This also is an appetiser for when the wedding is over and we’ll have to find a new hobby or pastime. My fiance will not need to follow wedding related people on Twitter and will probably have little interest in wedding videos on YouTube. But I’m sure something will crop up. Just like when we returned from travelling nearly 2 years ago and had nothing to focus on until we got engaged, something else will crop up again.

Posted in Uncategorized | Tagged to do list, Wedding, wedding board | Leave a comment
A Groom's view
Blog at WordPress.com.